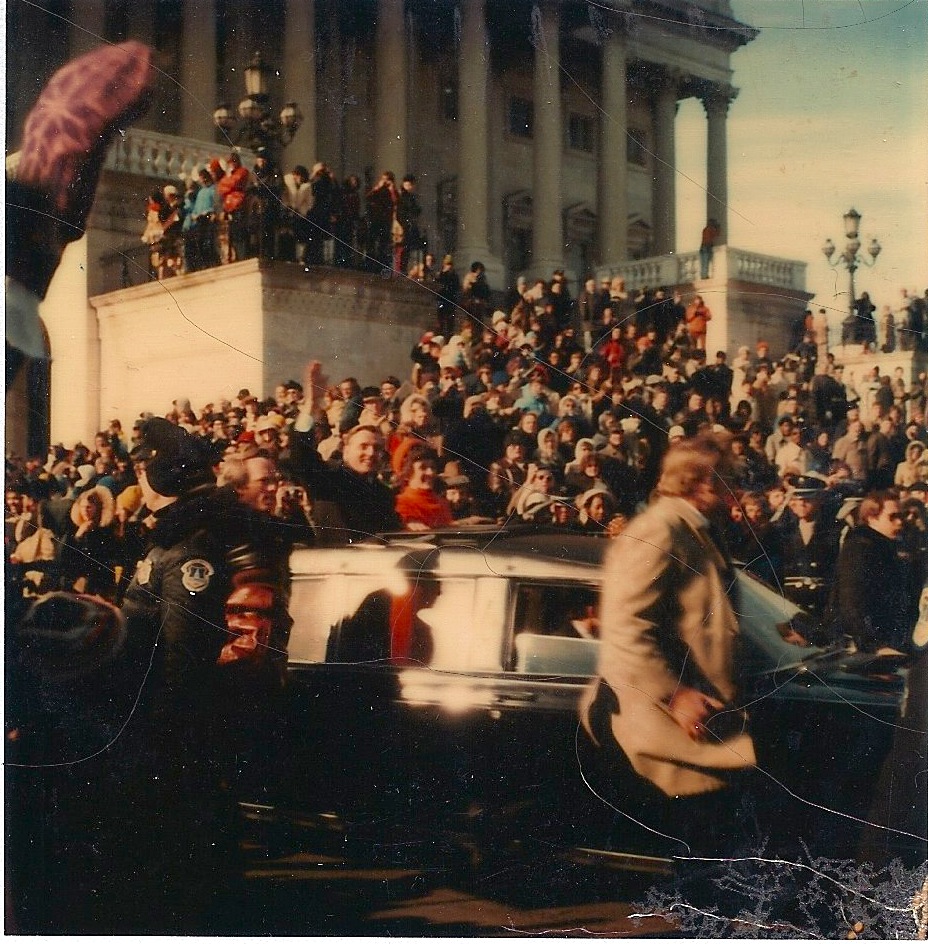 Mondale & Red Wife.  (c) Russell Scott Day Photo, from original SX70 print.  You can find the movie of Carter’s Inauguration Common Fool’s Trip to the Inauguration on youtube in the Carter History playlist.

What I watched last night of one part of the Clinton Unit, and Trump made clear that these people do not no more than I do, or even more or are better than we would be as President.  Democracy has a point and that is what it is.

I watched whatever it was, a Profile set of Veterans questions to a potential Commander & Chief.  Hillary Clinton mentioned the Headquarters Tent & the Foreign Service Professionals.  I think of them from some of Dan Sherman portraits in White Mandarin.  His other book that impressed me from Berlin days was The Prince of Berlin.  Berlin was the hotbed of intelligence services conflicts.  “Some of us took the Cold War more seriously than others.” is the flap line.

& Wedemeyer & China and FDR & Zionism & Foreign Service Professionals.  They told FDR things but he had friends that he barbecued with like, he was going to please because of Eleanor.  By then his brain was turning into a rock and he just died.  The UN was supposed to figure it out.

My most published story was a spy story about espionage in Rochester NY because of the great wealth of technical inventions engineered for spy machines.  Then there is the theory you can’t hit what you can’t see.  Likely the spies are still all over Rochester, NY.   The Spies do not necessarily get better intelligence or advice.  I see Hillary going all wound up with no time to think too much or work at keeping secrets.

I got a headquarters tent from Sid when planning my go to the radio station street and do my Currency of Fame Noise from the Inverter to give me DC to AC power to run the sound equipment.  I need really a sound car or truck since I really can hardly carry everything around back and forth to the car, and the car now won’t lock.  There a lot of sticks in the trunk.  I need to move them?

What big deadlines do I face, or have I faced?

Well it is extra weight calling for more energy out the gas of the motor and pushing weight down the street is known as harder if you are on a bicycle.

The tools of government start as just nothing but the System.  It is a human system so that it falls apart if the humans don’t believe in it.   Making this from a flaw to a feature has escaped us many times. People believe in stupidities that they loved as children.  To counter that you teach children smart and true aspects of the belief system that contributes to the greatness of the system on down the road.

It was believed that the natural animal human would find its own perfection so it was a bad thing to give children systems, or discipline.  No one can believe so what is there to teach anyway?   Catholic school nuns do not have that attitude.  2000 years later they are convinced of the best way to get children to be “Of the Church”.

So what of Democracy, the United States that Spawned me with it’s great mythic heroes of our revolution?  I find now I still believe in what I have picked as the best of the inspirational stories I learned young in the nation.  There was the Encyclopedia to read as all for a good while in my youth.  National Geographic, & the Encyclopedia were not enough.  When I got paid I went to Greensboro and bought books a the news store book store, paperback store down the now hip go look at the artist zoo end of the street.

Pulp paperbacks are more a big deal when I think about it.  Amazing Tales, & whatever it was was Space.  All of a sudden in this world I was 11.   I’d gotten my paper route.  Work was freedom because it paid me.  As an independent business man the wage slavery was not the thing.  Maybe sweeping the floor at Matlocks gave my brother a mean streak early.

Personality is inherited but Character is developed.  I am still an unreconstructed Boy Scout.  I wonder if my friend is always a Catholic school boy, Jesuit educated before college.  He worked in a steel mill for awhile.  People like us are supposed to move on through.  The others are staying where they are.  He told me of the guy sang Opera in the steel mill, well, all day, while working.  It was Buffalo.

I was on the road like Kerouac a lot and spent a weekend in Buffalo after a long tour of up into Maine started as a shorter trip.  Stuck in Maine I was driven down to Buffalo then dropped off in Rochester.  Wonderful people all along the way.  Most of the time.  I was trying to write a book.  I wrote as I can write, which is the novella.  As Shirer said your first book is mostly typing.

For Hillary Clinton her mission is to fix other places in the world.  “We had to do something right then because he was killing his own people.”  The UN was supposed to have been made to do these jobs.  It is a reach too much for the United States to be the World Government in my judgement.  This is where she is going to get us all killed.

Democracy is great.  Maddow was most correct saying this is what we get when we do Foreign Policy in secret, or War is run by the CIA., “Same Difference.”

Wisdom was my answer.

Trump is absolutely no fun for me to watch.  It is all because he is such a fucking liar.  I remember covering, defending myself in a job conflict of complaints to my boss at the time when I had a boss before that wisped on after I stopped going to the office.  How much was it true that I had been training their crew, it was enough.  You couldn’t help those people and there were others making movies that just created blood vessel in the neck bursting moments that ruined beauty and peace.  You do have to think fast in New York.  Saying something for him is doing something that will help him and the intention is to shut other people up only.  He is browbeating you.

Raw Democracy right there in your face proving the People really need to understand why they have a vote because if these people were dictators, which they want to be, of the whole world, disaster will follow disaster till they die.

A good King like King Alfred of England who fought the lying Danes then built a shore navy and had all armed and ready to kill the Danes, was seen as wonderful and rare.

Since we cannot expect Great Men to be there to make our history all of the time, Democracy is the hedge.  Britain has never had a good King in my lifetime.  There was Reagan’s girlfriend Thatcher for the British and look what they got but more of whatever the stupidities of the US belief system of greed and pictures had, but more in lots of ways.

Wonderful concept and show it was.  I’d like to see a set of retired Foreign Service Professionals ask some questions.

buy a bag or hat with the flag on it  http://www.cafepress.com/transcendia

The Great man and History, history and us.  A job.

The mission is to make mankind a big time insured of life forever out there and here species and it is looking touch and go.